How It all Began

Circa December 1970 a meeting was held over a few beers at the Beach Club on Seven Mile Beach. Eight people showed up and of those founder members two of us, Paul Sleep and I (Mervyn Cumber) still live here. Bernard Knights still visits the Club at least once a year. We started by having touch rugby sessions at the George Town Primary School playing field and this continued through 1971. At that time we were looking a potential site for a pitch.

Captain Charles Kirkconnell and his two sons were partners in a car rental company and I knew the family well. Captain Charles and others had just finished dredging in the development now called “Pirates Lair”, and within a year wild grass and Casuarina trees had sprouted up. The reason the pitch is at an odd angle to the main is that that patch had most wild grass on it!

I approached Captain Charles with a view to the club using this area for a rugby pitch until they developed it and he was very happy to oblige. Chris Evans a local Surveyor has been a long time Club supporter, and he and his crew surveyed out the pitch. CUC very kindly donated and planted four light poles for us and we had the semblance of a pitch.

It took many work parties to dig out the pine tree roots, but eventually we had a pitch that was half grass and half dredged sand with sea shells and coral in it!

Then with fundraisers and donation of time by many we built a small club house located in the current car park where the sewage pit can be seen! We all took part in a bar rota and all we served was Heineken, hence we became known as “The Greenies”! At one stage in our club history, Jacques Scott & Co. let us know that the club was the single largest consumer of Heineken in the Caribbean!

The first game was played against a visiting warship in 1973 and we then started touring to Jamaica as their Rugby Union had kindly invited us the play in the “CafenolSheild” league. We suffered many losses in this league, but eventually beat Privateers club in a Sunday morning game in 1974. From this one game the club went on to beat all the clubs the following year, and we won the shield on many occasions.

Sadly, due to Jamaican politics etc. a lot of the expats left Jamaica and their club rugby suffered greatly, and we then started looking to the Bahamas and the US for fixtures. Miami used to play us twice a year.

In 1984 – 1985 the current club house was built by a good club supporter called Mike Lockwood who had a construction company. All the monies were raised by social events and membership fees, and a small bank loan.

I would like this page to become an arena for anecdotes from the past. If you would like to add anything to this story, or have any other interesting information, then please send us an email……caroline.deegan@caymanrugby.com

Marcus Cumber provided me with this picture - he's the one in the green shirt in the front row with his finger on the ball. Marcus is not sure of the date but thinks it 1978!

If there is anyone out there who can confirm the date, and identify any others - I'd love to hear from you. caroline.deegan@caymanrugby.com 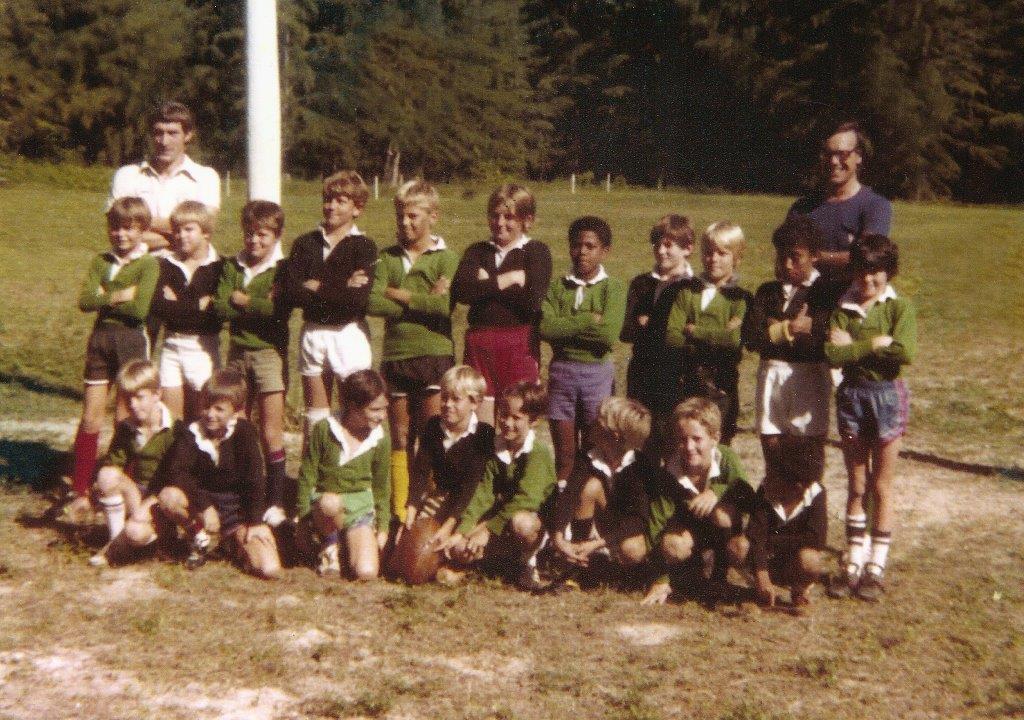 Hearing stories from some of the more senior members of the rugby community that the Heineken sponsorship of rugby here on Grand Cayman is something special. When you talk to some of these people all sorts of interesting “facts” appear, amongst which are:

If there are any other interesting “facts” you'd like to see on this Alumni page please email caroline.deegan@caymanrugby.com